“Did you girls have fun?” Aunt Punchy asked when we got back home. A quick glance at each other told the other what to say. “Yeah it was a lot of fun.” We both said in unison. “Oh really? I heard there was a bit of a scuffle at the club tonight and you two where almost in the thick of it.” Aunt Punchy said evenly as she looked from Bombay to me. “We didn’t do anything it was all this guy Hyp met.” Bombay said at the same time I said “It wasn’t anything really this guy Bomb met started it.” 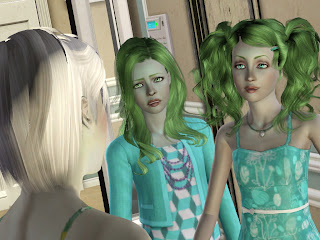 “I don’t care who started it, maybe the two of you should have left when I did. Listen I’m not going to tell my mom since neither of you was in the actual fight. Now I highly suggest the two of you get to bed” Aunt Punchy said after a moment and we could hear Uncle Sunny chuckle from the sofa as he read his book. 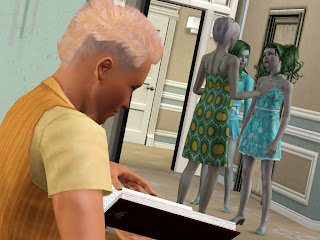 “Look at you, all mom like already.” Sunny said to Punchy as she sat down on the couch next to him. “I can only imagine how our little one is going to be, the shenanigans that they’ll be getting into.” She said as she chewed on her lip “You mean the trouble that they’ll get into if they are anything like us. But I don’t think we’ll have anything to worry about, who knows we might just have a little angel on our hands.” Sunny said as he soothed away Punchy’s nervousness. 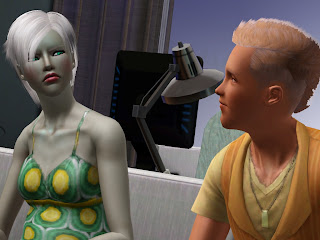 In the bedroom that Bombay and I were sharing, we were both getting ready for bed. “I can’t believe you ratted Fade out like that.” I said to her and she just rolled her eyes. “Hyp he started a fight and at least I didn’t tell her that you are planning on seeing him tomorrow.” She said back to me as she walked in to the bathroom to brush her teeth. Following her I asked “Well are you going to come with me?” She didn’t answer right away as she brushed her teeth. “I guess so.” Bombay replied as she moved out of the way so I could brush my teeth too. As I brushed my teeth I silently thanked Berry that Bombay had not told our aunt that I was planning on seeing one of the guys that got into the fight. 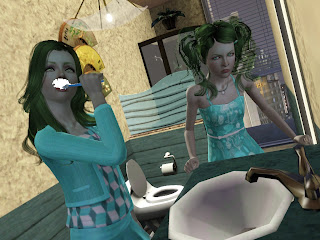 The next morning over breakfast I tried to casually bring up the location that Fade had wanted me to meet him at. “Sooo, Aunt Punchy do you know where the Crusty Loaf is?” I asked trying to act as if there were no motives behind my question. “I know exactly where it is. It’s a popular location for blue collared youths, your Uncle and I hung out there a lot when we first arrived in Briocheport with out a dime to our name.” Aunt Punchy began to explain as she started to get a far away look in her eyes. “Yeah, we had some good times there.” Uncle Sunny said agreement with her as he brushed a strand of hair out her eyes. 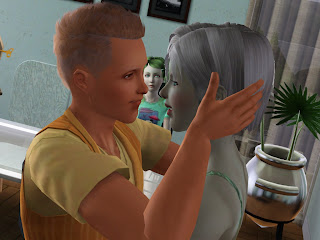 “Right, so how might I get there?” I asked again as I tried to steer the conversation out of the reminiscent times of my Aunt and Uncle. “Take a cab or subway is your best bet you won’t make a lot of friends driving my mom’s there.” Aunt Punchy answered as she handed Uncle Sunny his coffee with a sly wink. “So who are you planning on meeting at the Crusty Loaf?” Uncle Sunny asked bluntly as he sipped on his coffee. “Hypnotiq is going to see that guy that got into the fight last night.” Bombay blurted out. 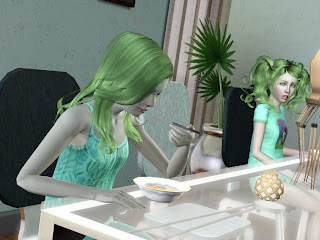 “Bomb! You said that you weren’t going to tell!” I said heatedly as Aunt Punchy asked “So what’s his name Hyp?” With a quick evil look toward Bombay I answered “It’s Fade.” As Aunt Punchy looked at me I waited for her to tell me that she didn’t want us to go meet up with fade. “You can go but you have to be home before curfew begins. If you are out past curfew and are brought home your Grandmother will be hearing of it.” She warned us as I promised that we would be back by curfew. 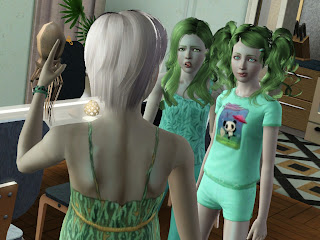 “I’m surprised you let them go.” Sunny said to Punchy as he continued to drink his coffee. “Well I remember a guy that everyone warned me against and got into his fair share of barroom brawls and he turned out quite fine Mr. Chiffon.” She said to him as he got up and wrapped his arms around her. “I think he did more than just fine Mrs. Chiffon.” Sunny murmured into her ear as he hands gently caressed her belly. 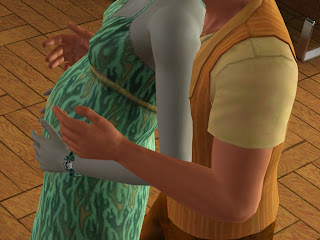 Bombay and I were on our way to do some sight seeing in Broicheport before meeting up with Fade. One of our stops was at the Butterfly Observatory, where we saw many beautiful butterflies from around the world. “Hyp I’m sorry I just blurted it out about Fade.” Bombay apologized as we watched butterflies float by. “Well luckily we are still going Bomb. I know you’re iffy about Fade because of the fight but I don’t know how to describe it or why I think I know that is Fade might actually be a really good guy.” I tried to explain to her. “Once you get past the fighting?” She teased. 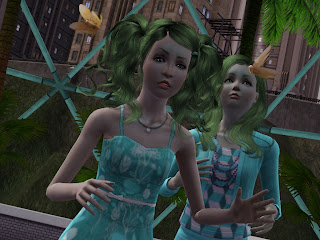 Looking at the slowly darkening sky as the sun almost done setting I replied “Hopefully but we need to go, the Observatory will be closing soon and we’ve got to meet Fade soon.” So we hailed a cab to take us in to the lower west side of Broicheport. 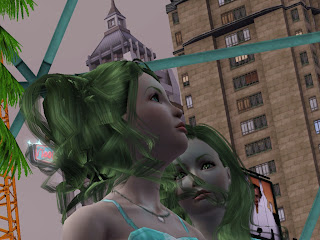 Stepping into the Crusty Loaf we saw Fade and his friend that helped break up the fight playing a round of darts. Fade quickly introduced us to his friend Bondi, who quickly said hi, though we could barely hear him over the noise of the bar. “Have you ever played before?” Fade asked me over the noise motioning to the dartboard. Shaking my head no he said “Let me show you how.” 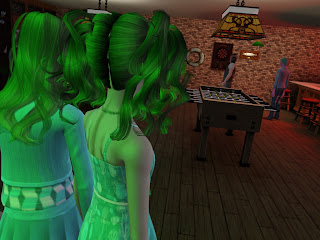 “All you have to do it take one of these darts.” He explained as he placed a dart in my hand while guiding my hand up so the dart was parallel to the floor. “Then you just throw it, trying to hit the red circle in the center.” Fade said as his hand remained over mine as I threw the dart completely missing the red center. “Takes practice how about we play a game? I’ll go easy on you promise.” Fade asked. 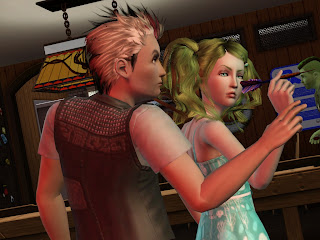 After playing a few rounds with the boys Bombay began to loosen and seemed like she was having a good time. Even Fade’s silent friend Bondi cracked a joke or two. Though after a while we grew restless and looked for something else to do. And before I knew it Bombay and I found ourselves riding the subway with the boys uptown. 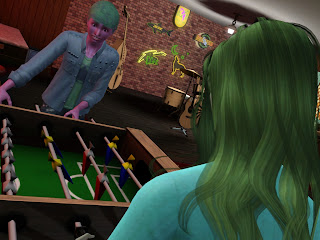 The four of us walked around the lit city, Bombay and I quietly to ourselves marvel at all the lights. Eventually we ended up at a point next to river that under looked the hills. Other pedestrians past us by as they went on with the night time walks save for one or two that looked at us too long in Fade’s book. “You got a staring problem or something?” Fade asked him but the guy averted his eyes from us and kept walking. 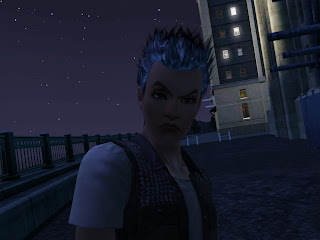 “So do you get into fights often?” I asked him as I wondered about his temper. “Only when I have to or there is something worth fighting for.” He answered me before asking a question of his own. “So what’s your story? You got someone special back home?” Fade asked and instead of simply saying not at this moment I told him of how I recently stopped casually seeing someone and I might have told him about Blue, though I left out the part of Blue’s name and being a former student of that Prep School that Fade disliked. 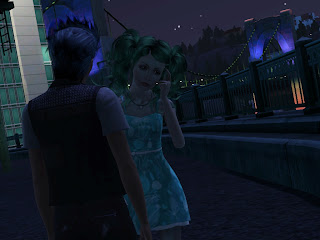 I don’t know why I told him all of that when I thought about it later on that night before going to bed. I wished that Bombay wasn’t busy getting food from one of those trucks with Bondi, so she could have saved me from my sudden case of well a more eloquent way to put it, cacoethes loquendi. I don’t know what it was about Fade that made me seem to just spill everything when he asked me.
Posted by cupcake at 2:22 AM