“So you've never been with anyone else either.. right?” Sugared Cookie asked me for the second time. Her voice sounded  almost nervous though her actions told a completely different story and it made me wonder a bit, but instead of thinking about it I assured her I hadn't even though it wasn’t exactly true. Crabapples, last month it had been with Frosty Fudge while we temporarily dated, then before that it had been with Almond Puff again while we temporarily dated, and before that…well you get the picture. But this isn’t where I wanted to start, not here with Sugared Cookie. So let’s begin at the beginning and I mean the very beginning. 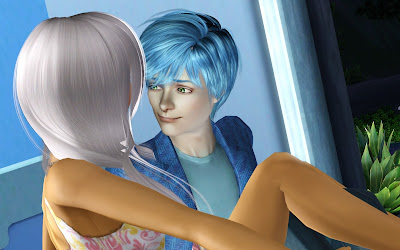 Even before I took my first breath I was famous. When I was born it only got worse with the obscene amounts that were offered to my mother for first pictures of me that magazines and tabloids wanted to publish so badly as if it might give them and the world some insight to my father’s paternity. But if I was going to grow up with out knowing who he was why should anyone else know? I had vague memories of him that held no consistency of what he looked like. My mother always told me that I got his hair color but so what, growing up I knew a lot of other guys with blue hair in my school. 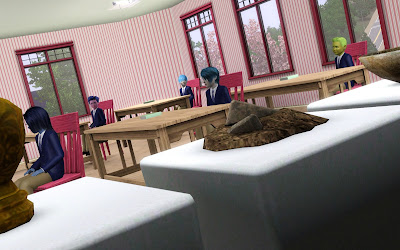 The kids at school were not any better and I was often teased when I was younger. Being the famous actress she is, it was no secret that my mom had never disclosed my father’s identity to anyone. “So Roux what do you have planned for Father’s day? Oh wait nothing because you don’t have a dad!” was what I would hear around that holiday. Sometimes they would straight out ask me infront in front of the rest of the students at recess “So Roux who’s your dad?” 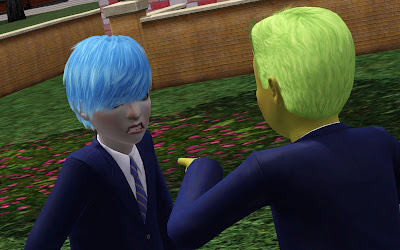 It was in the 6th grade that I decided to stand up for myself against them at recess. “I don’t know maybe it’s your father. Did you ever think about that?” I shouted at the one who had asked that Dew Mountain before shoving him with all of my strength. I had never gotten into a fight before that day so I wasn’t sure what really to do after I had shoved Dew. But I didn’t really have to wait to find out because moments later I was tackled to the ground. It was then all berry broke loose on the playground and all the kids started cheering for either Dew or me. 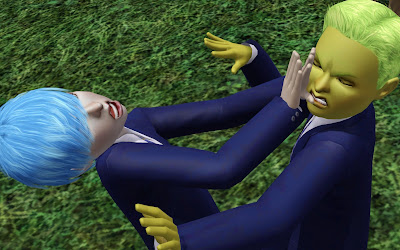 Somehow my younger brother found his way into the fight as one of Dew’s friends jerked me up trying to hold me back as Dew began to get up and smiled but not for long. Quickly as he could Ashen shoved his friend, knocking him and incidentally me to the ground I indignantly said to him “I don’t need your help Ashen.” I felt embarrassed that my half-brother a 5th grader had to come to my rescue. But it didn’t matter because teachers began to blow their whistles as they surrounded us and the four of us got hauled straight to the principal’s office. 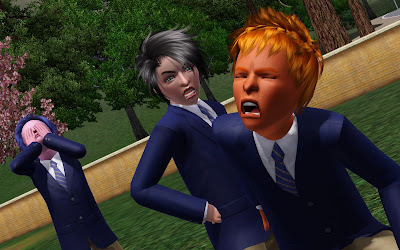 My stepfather was the one that picked us up thankfully. If it had been my mother she would have lectured us the whole way home so I was glad that it was Fade that walked through the doors of the school office. But I would never in a million years ever admit that to him. Sure he was a nice enough guy that my mother loved a lot but I always got the feeling that my mother chose him over my father whenever I could get her to talk about him. Even though I barely remembered by father I felt some sense of loyalty to him and couldn’t bring myself to liking the idea that Fade had replaced my father. After a car ride of silence when we had gotten home Fade sent us to our rooms. 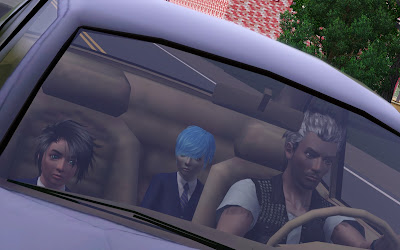 Walking through the perfectly grey and teal  home I breathed a sigh of relieve as I got to my room, the only room with the color blue in the house.An hour or so passed as I played with a few toys as I delayed doing any of my homework when there was a knock at the door and Fade came in “You want to talk about what happened today Roux?” he asked me as I countered back “What do you know Fade?” Sounding out the syllables of his name instead of calling him Dad like my mother and him had politely suggested a few years ago after their wedding. Even though I could see their point back then since Fade had helped raise me since I was a toddler I still couldn’t bring myself to ever call him something that he was so obviously not. “Well if these is one thing I know that’s how to fight, could even kick your... You know what never mind that… I’ll give you a few pointers if you promise not tell your mother.” Fade before he made me promise I wouldn’t tell her, which I rolled my eyes as I did so at his apparent attempt to “bond” with me. 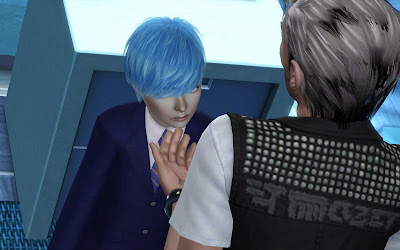 Throughout elementary school I still got picked on for the same old reasons but by the time 7th had begun that all seemed like the old new that it really was. I suddenly found myself at the attention of quite a few of my fellow female students, in the halls of school I was handed notes from a friend of theirs followed by a series of giggles as they would rush off to their next class. Inside would be your typical note “Check yes if you like so and so or Check No if you don’t followed by a sad face” Followed by the uncertain walk back to the girl’s friends to give them the note back after making your selection and you know as you walk away that they’ve quickly read the note before heading off to give it to their friend. 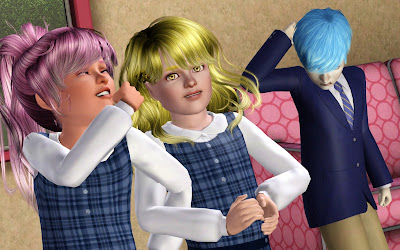 Shortly after the school year had begun I made the football team and oddly enough half way through the season I found myself hanging out with the guy that I got into a few fights with Dew Mountain our teams main linebacker. It turned out to be that his father was football player for Briocheporte’s Bread Ballers team and during the football season both his parents were often away. It wasn’t long before I attended my first unsupervised house-party which were pretty tamed when I think back about it compared to the ones I would go on to go to later on. 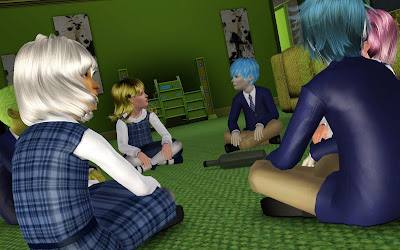 By the time High School rolled around I was on the varsity team and regularly throwing parties at my house whenever my mom and Fade were out of town, though they were always thrown regretfully with Ashen’s help. It was one of the few things my brother and I could agree on and with his help the place was easier to clean up before they got back plus his band always provided the music for free. 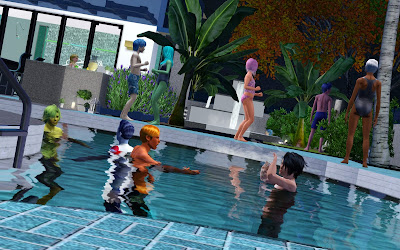 When I wasn’t able to throw a party more often or not my friends and I would head to downtown Briocheporte to get into all the clubs that at our age we shouldn’t have been able to but when you’re face has made the papers so many times since your birth people are very often open to overlook things that they normally wouldn’t, especially when your mother is an A-list actress. 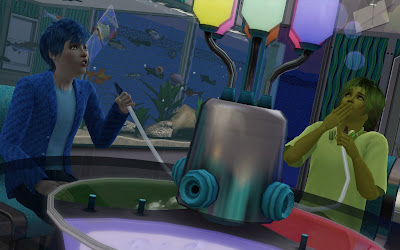 So that brings us back up to before this point here with Sugared Cookie. I guess you could pigeonhole me and label me as a jerk among other names that I don’t really care to list. But I don’t really care; I’m rich, young and always looking for a fun time. Just like I am right now with Sugared, I know what you are thinking one day I’ll grow up and see the light or maybe something will happen and I’ll have to suffer the consequences. But girls like Sugared Cookie are a dime a dozen, daughters of Briocheporte’s wealthier families that have and want everything, yet still are not satisfied. They get bored and begin to try to date guys like myself in hopes of getting their faces in the papers and magazine, maybe one day they’ll have the awards my mom has, that they gush over when they come over so maybe one day they can be more than just their family name. 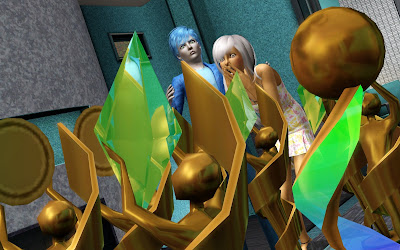 I will be the first to admit that I am in no way an angel but I’m not dumb either, I won’t let myself to be used by someone that wants more than their fifteen minutes of fame. They always want to meet and question my mother the famous Hypnotiq Meringue, A-list actress to world but mom to me. My mother... The one the that held all the secrets about my father and kept them selfishly to herself. Truthfully dating these girls wasn’t always too bad especially when I unleashed them on to mom like rabid fans that would fire off questions as quickly as they would barely get in a breath in between each one. Questions ranging from who was her agent and how could they get in touch with her to if she could get them a part in an upcoming movie. I can’t help but laugh at the situation from the sidelines. 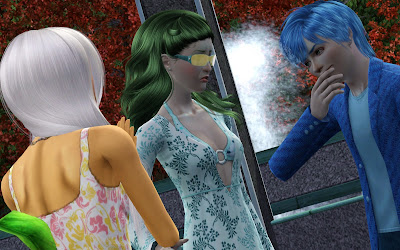 Life was good except for the blaring fact that I’d probably never find out about my father but that doesn’t matter. It’s not like who he is would probably define me in any way or that I ever hoped that maybe he would see me somehow though it probably wouldn’t be in a flattering light from the tabloids I might have graced, especially since starting high school. So what every girl that wants to date me will dump me after they've gotten their name in a tabloid or two and have found some sad excuse of agent willing to represent them as they fill their head with hopes that their dreams comes true. Or that I lie to them as much as they have to me. Everything is fine, life is good and it's as perfect as it could be. 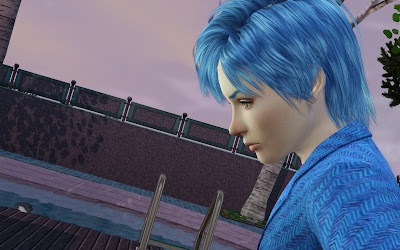