Chapter 12 Part 1 Here
As one life had run its course another sought to be born and known. It was barely an hour after the funeral that we had gotten a call that Shiraz had gone into labor. When we got back to the hospital we found her alone and asking for Flaugnarde.  “Where is Flaugnarde? He said he would be here.” She cried out before clutching her stomach in pain as she withered in the hospital bed uncomfortably. “I don’t know, it’s not like I’ve ever talked to him before.” Roux replied crossly though he looked at her concernedly not knowing what to do or what boundaries he was hedging on. 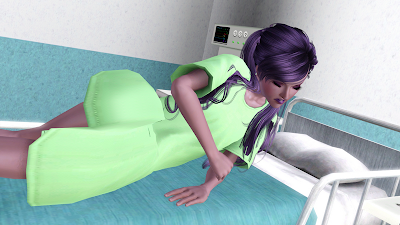 “Where is her doctor?” I sharply asked the nurse who just shrugged and said “He’ll be here when he’ll be here. This is her first child she’ll probably be in labor for a while so no need to worry. The whole maternity wing is full up, I’ve never seen anything like this” Before she left, leaving the rest of us to wait some more. Time ticked by slower than before. Outside of the birthing suite’s door sounded eerily quiet, the only sound that broke the silence was Shiraz’s ragged breathing that would intensify every once in a while followed by a gasp and a pitiful painful cry sounding each contraction, that would escape her lips. The nurse might have passed it off as it being her first child and there would be more than enough time for her doctor to get there but her contractions where getting closer and closer each one of them making her cry out in pain. The last one sent her sitting straight up in bed as she clapped her hands over her mouth to stifle her painful cries. 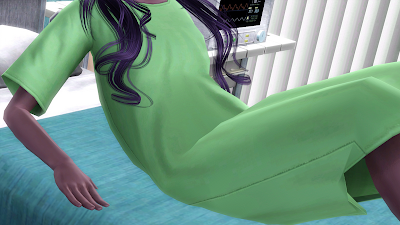 “That’s it! I’m going to find a doctor.” Roux said as he shot to his feet and quickly left the room leaving the two of us alone. “It hurts, it hurts so bad. Why won’t they make it stop?” Shiraz ask in a raspy voice with her eyes clinched shut and her hands on her belly. Sighing I got up from the chair and poured cup of water from the pitcher that was next to the sink. Giving her the cup I quietly said “A doctor needs to see you first before they can give you any pain medication. Try breathing in and out, find a focal point in this room that you can focus on when the pain gets bad. If your contractions keep coming as quickly as they have started to it won’t be much longer and then the pain will be over for the most part.” 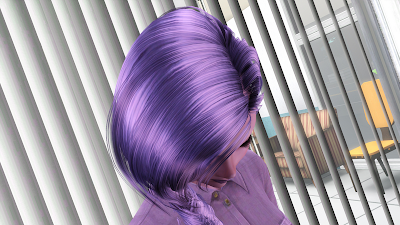 “Thank you.” Shiraz said humbly after taking a sip, she was still unable to look me in my eyes. “Don’t. I’m not doing this for you or to be nice, you’re not even on my radar. I’m doing this because the people I love, that’s their little sister in there and his…” I paused for a moment not even wanting to say the next thing out loud. “That’s his daughter. But you, you, I don’t care about.” 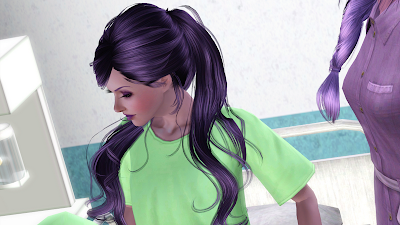 “I’m sorry about everything that has happened.” Shiraz said as she clutched my hand tightly as if I was the only thing that was anchoring her down before the pain could sweep her away as another contraction quickly passed. Her purple eyes finally stared into mine as if they could make me understand how sorry she might have been at this moment though I really had my doubts that she was and if it wasn't because of what pain she was in. 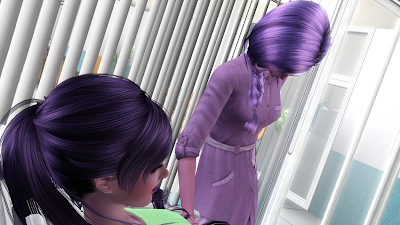 “You should be.” I said as I pulled loose away from her before I could even stop myself though neither of us had time to react to our words before Flaugnarde burst through the room looking quite shaken as he appeared to apologize profusely in his language and she smiled wearily as he did. It wasn’t much longer before everything else came together and my husband’s daughter was born shortly after the doctor finally arrived. She took a quick look and announced it was time. Roux reluctantly hung back as Flaugnarde went to the side of her. “Come on we’ll wait in the waiting area.” I said to him as I slipped my hand into his. “Of course.” He said in a strange voice as he struggled to give me a smile to show that he was fine with that before we left the room to wait. 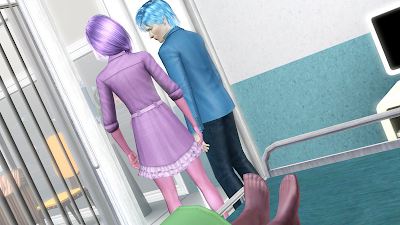 “Her name is Violet Bluebell.” Shiraz said after the both of them had been cleaned up and we were allowed to see them in the recovery unit where they would stay for a few days before being discharged. Upon hearing his daughter’s name Roux faltered for a moment as he looked over to Shiraz, the significance of her name was lost on me though I tried to quickly push aside any thoughts of jealousy. “Her name is Violet?” He asked holding his daughter close to him. “Yes, she’s my best mistake.” Shiraz said tiredly before looking away and my husband didn’t reply as he let his newborn daughter grip his finger tightly with her small hand obviously ignoring her statement as we all did together in that room. 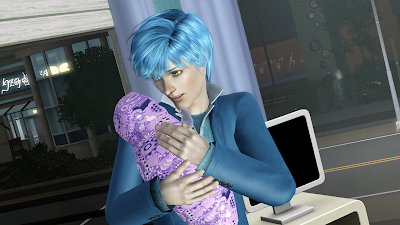 Over the next few weeks Flaugnarde would bring over Violet to our house while Shiraz was as he said resting and recovering. Together the seven of us bonded together as a family and I had to admit that it was hard not to fall in love with her like she was one of my own. 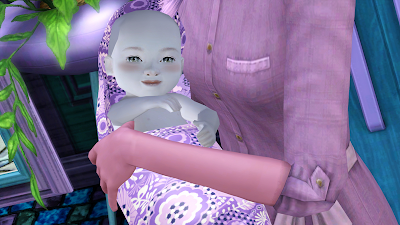 Wisteria and Porfirio were the most interested in the new baby though they didn’t understand that she would be leaving soon to go back to her home for a while. 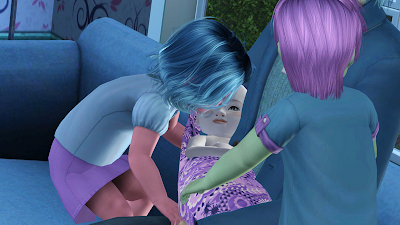 While Indigo and Starry could care less and was more interested in discovering the things that came in her diaper bag with her or trying to get a hold of the willow in the wisp that their father caught one evening that Porfirio spotted in our backyard. 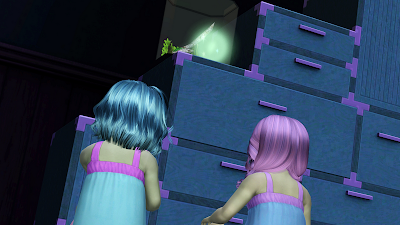 But when those weeks were up it was time for Shiraz to go back to Chambery. Flaugnarde flew out once again to fly back with her and it was a shame that she couldn’t see what was in front of her face with him as he doted over her in the most endearing ways. With a weary sigh Flaugnarde seemed to confirm what I was thinking as he watched her take Violet to the bathroom before they would board their flight. “She’ll see it one day you know.” I said to him and he halfheartedly smiled before replying “One can only hope but neither one of us is getting younger and more often I would like to be something more than someone she can always lean on. I do have a date with someone else after we get back, see how she likes that.” Flaugnarde said with a rueful smile. “I can’t imagine she will.” I said with a smile of my own “He’s lucky to have someone like you, you know-… Back from the bathroom already?” Flaugnarde asked as he saw Shiraz and Violet approaching, while I caught a head of aquamarine colored hair quickly weaving through the crowd in the opposite direction from the parking lot. 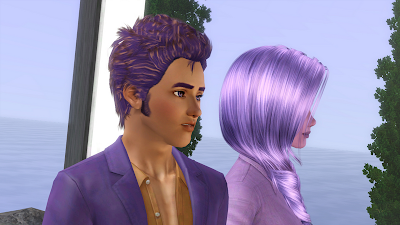 “Guess everyone is going on vacation or something” Roux said dryly as he shortly joined us. When we had arrived at the airport he had asked for a few minutes alone to park the car. Comply with that I had went into the building by myself and found them right before Shiraz went off to change Violet. Like the rest of our very brief encounters these past few weeks this one was every bit as awkward. Flaugnarde’s disposition changed the moment he saw Roux as he put a protective arm around Shiraz while she herself looked tired and drained as she look at anything but the berries she was with as if she could place herself somewhere else. My husband just looked plain miserable, through and through as he stole glances at his daughter while he apprehensively played with his keys. “I guess you need to get down to your gate soon.” He said reluctantly though I knew it had nothing to do with the other woman before him but the little sleeping girl she held in her arms. With pursed lips Shiraz handed over Violet to her father and we stepped away from our small group so he could say goodbye to her. 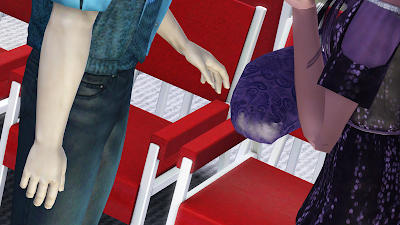 “Hey Violet the next time I’ll be seeing you, you probably won’t remember who I am and you’ll be so big compared to now. But this will only be for a little while, I promise you I’ll be a part of your life no matter what. And always try to remember that, that guy with the goofy purple and brown hair is not your dad. I am.” He said quietly, trying not to disturb the sleeping purple bundle as he said goodbye to his last child. 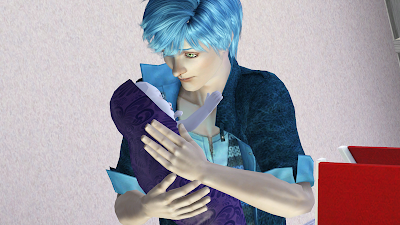 We soon fell into a pattern of visiting Chambery every few months as the years progressed. Wisteria and Porfirio grew like weeds as they came closer and closer to starting school. The summer before the new start of the school year Roux and I realized that our next trip fell around the same time that they would be beginning school. “We’ll be leaving a few days after they start school and we’ll be back within two weeks.” He pointed out as we each had one of our youngest set on a riding toy while Wisteria and Porfirio played with the waterslide while the weather was still hot as it was. “But I don’t think we should have to pull them out of school just when they are starting, not to mention everything they’ll miss in that time away from school.” I was quick to point out before I said “Maybe we should wait until their holiday break?” Which was immediate met with him shaking his head in disagreement as he said “We already cancelled the last trip because of my great aunt Ocean’s funeral; I really don’t want to put off another one.” 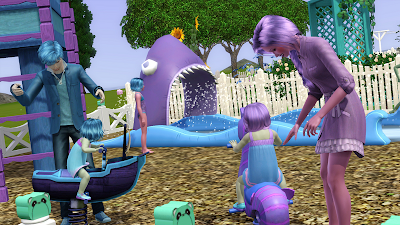 “Maybe you should take this one by yourself? It will only be for less than two weeks.” I replied and his reluctance to the idea was evident even before he said anything. With uncertain eyes he looked over at me as he said “I don’t know if that will be a good idea Aubergine.” 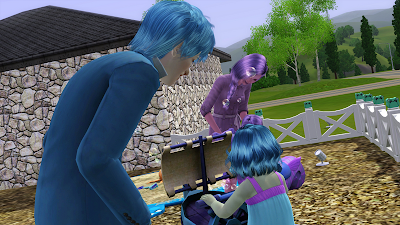 “I trust you.” I managed to say even though the tiny voice in the back of my head yelled to be heard. “I trust you Roux.” 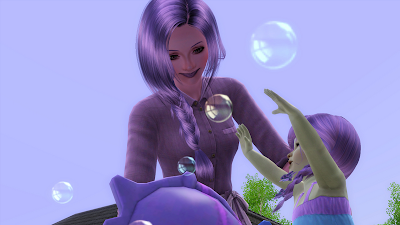