Jibberish of a Bio for a sim.

So I know I posted this sim already on here but I recenly wrote a short bio for her for a little competition.  Of course I wrote it at an hour most people are usually asleep so don't mind how it might ramble on just a bit.


Bio: You can just call me Angelique, my last name needs no concerns since after the first century in the life of the undead it really doesn't matter any more. I was born into French Aristocracy a true Noblesse Ancienne. My Mother died during childbirth with me so I became my father's pride and joy in a time when having a daughter was not something to be celebrated. The last thing that connected him to a wife that he had at one time been arranged to marry but had been fortunate enough to fall in love with. He was able to put off the arrangement of my own personal marriage until an unheard of year. I was no longer a young maid when I was finally arranged to be married, I understood my suitor would be getting a very handsome dowery out of it. We were to travel through the night in order to get to where I was to be married on time, a choice my father did not make easily. So through the night we traveled, the clouds shrouded our carriage from the light of the moon as we traveled on a worn away path that cut through the land.


I had just fallen asleep when we were brought to a sudden stop. The cabby called out to someone into the night asking if everything was alright. There was no answer the night was silent. Then we heard the cabby suddenly scream for a moment until it was cut short. After that the door to our carriage was ripped open by an inhuman force. Faster than my eyes could follow my father was pulled from the carriage, he didn't even have time to yell out. I gripped on to the walls of the carriage digging my fingers into the wood waiting for it to come for me. When its withered and burnt face appeared in the doorway I couldn't help but shudder as it stared at me, its eyes going over every inch of me. It was all I could do until I too was pulled from the carriage, my life forever changed as it ended. My maker was not one of those debonair vampires that have become so well known through the world but a savage beast of a being. Brutally taking the essence of my being with every gulp of my blood it swallowed and eventually as I lay there dying replacing it with it's own. As quickly as it had come it had left leaving me there in the dark night alone changed forever. I would never encounter it again nor ever find out the reason why it choose me.

Traits:
Great Kisser, Flirty, and Schmoozer~All the better to ensnare my victims till I take the last sip of their last breath.
Hotheaded and Snob~I might be part of the undead but I'll always have the high standards of the aristocratic life that I had previously led along with the temperament of one that had been spoiled too. 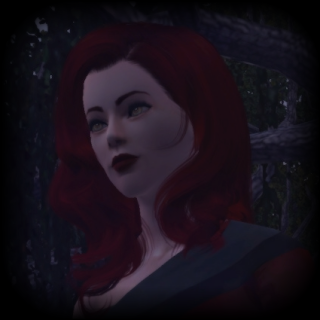