BerrySweet Comp. Cycle 6 Assignment 6
I still think about you and sometimes I dream of you sleeping like I do now, in a place of faded colors so I try to fill it as much as I can with shades from my own memories as I barely reach you. You’re older now the same as me having grown as you’ve always used to grown alongside with me. Still with hair a shade of I’ve never really seen before. I look upon you now as you sleep not wanting to wake your peaceful slumber to see if you dream of me like I’m dreaming of you and if you remember me like I remember you.

Hesitating a moment before I decide not to brush the hair away from your face thinking of the day you disappeared from my waking life, only to be seen sometimes in the glimpses of my dreams as you dream of your own. “Queen Cookie-Wookie it is time.” Octoberry-Pie reminds me as the sounds of clocks tick louder and louder. Maybe one day I’ll have my happy ending and you’ll be a part of it but until then I must ride off now to chase sunsets and fluffy cotton candy bears that await me on my faithful pink steed Ellie-pantasuraus. 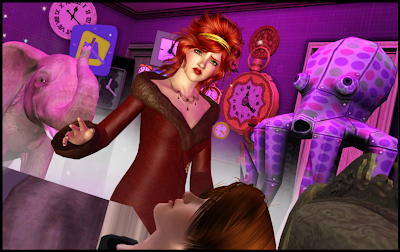 Vampire the Masquerade
Bolivar's first feeding was incidentally on his wife. You can't ever return home.They are not to know of what you are now. his maker had said to him, though he didn't listen as he quickly got away. Her scent and body crushed against him as she closely held him when he first walked through their door. The combination was more than overwhelming, the beating of her heart almost rang through his ears. In a blur of a moment his lips and fangs quickly found her neck as he began to return her embrace. Slowly the the beat began to lessen before he realized what he was doing. As the life began to slowly fade from her eyes he felt desperate. And in the desperation he found himself cutting his wrist with a shard of glass from the vending machine that they had stolen one summer's night after their water had been shut off. Knelling down he dropped the glass on the ground, his wound started to heal as he pressed it against her mouth in a futile attempt to save her. But what little blood did enter her mouth before his wound completely healed just trickled out. The same desperation pushed him to try again as he cut himself once more and used his other fingers to quickly open her mouth as he pressed his wrist once again to her mouth as nothing happened again. It was too late. "Why won't you live?" He shouted in anger at her lifeless body as the sound of an amused chuckle coming from the doorway met his ears. 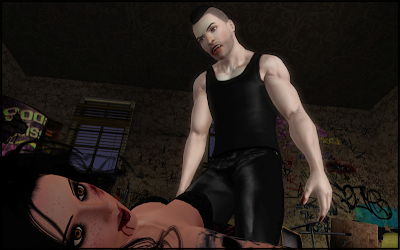 Ares Bolivar my Vampire Model for the Vampire the Masquerade Comp has been uploaded here
Posted by cupcake at 2:31 PM