Settling in at her father’s house was as easy as slipping on a glove. The beauty of the French country side surrounded her, enveloping her with the sweetly scent air that would drift from the blossoms in the orchard. During her time not working for Tolie she would spend the day for the most part alone, savoring the stillness and quiet that the house had to offer before the rest of the inhabitants awoke. While the sun was almost done setting she would cozy up on the couch with a few glasses of wine and a small plate of cheese waiting for the other to come.


In a blink of an eye a month had past and another day was slowly slipping away. With the last bit of sun barely disappearing from the sky the slight sounds of sleeping inhabitants starting to stir could be heard by Fallon. Glancing out of the window Fallon watched the sky slowly turn into a deep blue. Sighing she swirled the wine around in its glass, watching the legs quickly run. Putting the glass slowly up to her face she quickly smelt the contents. Then moving the glass closer she deeply inhaled noting the scent of oak with a hint of citrus in her mind. Finally she took a sip, letting the wine flow into her mouth. Closing her eyes she rolled the wine around in her mouth, noting the flavors of fig, cinnamon, and cranerlet grapes before swallowing. 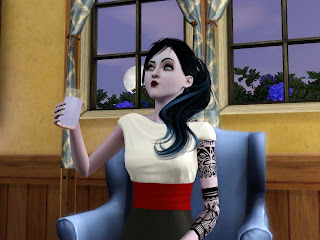 When suddenly from the base of the stair there was a chuckle. With a smile Fallon opened her eyes and turned around facing Dorian. “If there are a few things that I would admit missing from my mortal life, then it would be a fine wine and a friendly lady.” He said smiling back at her as he returned her smile. “Your memory astonishes me since it’s been more than centuries since you’ve had either.” Fallon replied teasingly as she rose from the couch. “Yes, well there are certain little joys that one experience in life that one never forgets, even if that life spans across a millennia my dear.” Explained Dorian with short laugh as he looking into her eyes, his liquid green eyes enthralling her. 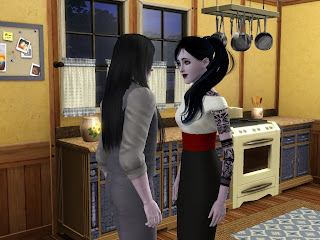 A moment or two passed as they just stared into each other’s eyes before he reached over to her face and slowly brushed a tendril of hair back. The feeling of him slowly moving the tips of his fingers back across her jaw as he withdrew his hand made her feel slightly dizzy as her breath quickened. Or was that just the wine? She thought to herself. 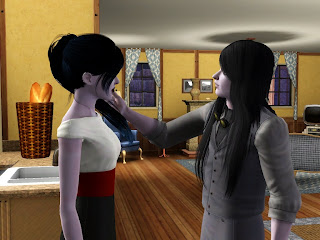 Laurent and Ivy’s voice’s echoed down the stairwell followed by a multitude of thudding as they came down the stairs. Fallon broke herself away from Dorian’s gaze as she turned to greet her sisters. “So where are the two of you heading tonight?” she asked feeling Dorian’s gaze still upon her before he shifted it to the girls. “Oh the usual, we’re going to the city to hunt the clubs.” Ivy replied as she took out a tube of lipstick. “Yes, but we promise not to bring any of this back this time.” Laurent joked as they both busted out in laughter. 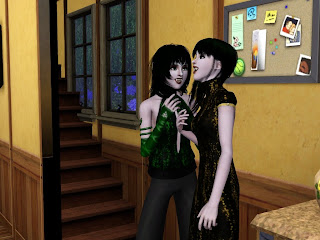 “That is not funny. You know the rules, in no way must reaper cross this threshold unless by natural causes.” Dorian stated seriously. “Oh but we were just having a bit of fun.” Laurent said as Ivy blurted out “It was Laurent’s idea.” Turning quickly to her sister Laurent said quickly “Ivy be quiet.” Shaking his head Dorian put his hand up and said “I don’t care whose idea it was. The two of you have been assigned to me as fledglings since your Mother’s death and the trouble you bring on to yourselves you bring on to me also. Now as young as you both are I’m sure you’re probably ravenous right now so I’ll excuse the two of you for now.” 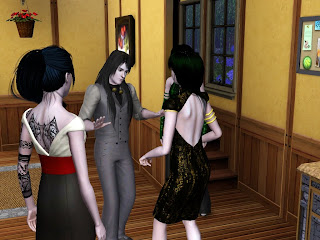 With that Laurent and Ivy said goodbye and left for the city. “Now my cherie what are you planning on doing tonight?” Dorian asked heading for the door “Depends on what you are offering” Fallon curiously replied back with a slight smile “What I am offering?” Dorian questioned with a chuckle before continuing on “Well I just happed to have an invitation to a masquerade in the next village if you would be interested…” 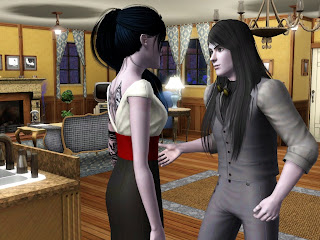 House by Ruthless_kk
Posted by cupcake at 10:13 PM