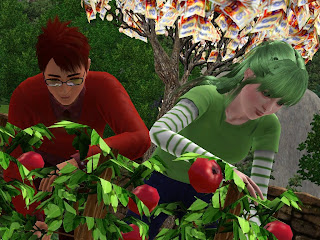 It didn’t take long for fall to come back around. Unlike from what my mother told me of her home country the leaves here didn’t turn color from white then to muted shades grays until they would blacken and finally fall to the ground. This amazed Apple as he made me promise if I ever traveled to Sugaria in the fall to bring him back some since due to Sugaria’s strict policies the chances of him being allowed to travel into the country himself were slim. But he did have a bit of a collection of pressed leaves that he gathered as a boy from his Aunt’s farm in Northern Sweetland during autumn that range from golden yellows, burnt oranges and even a crisp red. On the weekends he travels out that way to help with the fall harvest and through some persuading of Minte I was able to accompany him a few times. Though I don’t think either of us would make for good farmers but it is nice to get away from everything once and a while. My favorite time during those weekends was the nights they would light a bonfire that we would all gather around sipping fresh hot mulled cider. When I would come home the scent of the kindling wood from the bonfire would linger in my clothes and hair no matter how many times I would wash them. 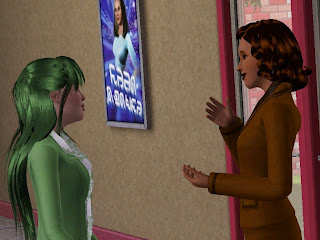 Back at school the year was going by quickly and at the end of it the three of us would be graduating. Soon I wouldn’t be dashing down the halls from one end of the school to the other just to get to a class or student council meetings. One day I was just closing my locker looking forward to winter break and a possible ski trip with Apple and his family when Principle Mousse approached me “Crème thank goodness you didn’t leave yet. I have to tell you, that you’ve been chosen as Valedictorian, you’ll be addressing your fellow students, their families and school staff at graduation so as you know you’ll have to have a speech written. And if you could can you inform Apple Crumble of our choice?” Principle Mousse asked smoothly as she walked away not waiting for an answer ,all I could think of was how I was going to break this to Apple since this was something that he was looking forward to as much I had. 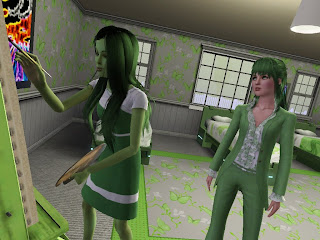 When I got home from school I threw my bag on my bed, Sabayon didn’t even glance up from her painting. I could hear Glaisey in our bathroom talking. “What is she doing in there?” I asked Sabayon “I don’t know on the phone or something.” Sabayon said under her breath sounding slightly annoyed. “What is your problem?” I asked concernedly “Marzipan broke up with me.” Sabayon answered as she vigorously painted on “Thought you didn’t believe in labels and since when are you dating?” I curiously asked her. “Well if we wanted to label ourselves as girlfriend and boyfriend then that would have been our titles but not anymore since he doesn’t want to continue the relationship we were having. And I’ll have you know that I am not the spinster that you think I am.” She said angrily as she ended our conversation with a thwat of her paint brush on the canvas. 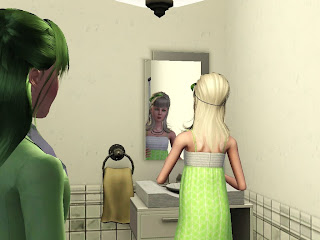 I could hear Glaisey still talking in the bathroom so I lightly knocked on the door before I entered. There stood Glaisey in front of the mirror talking “This is Anglaise Meringue bringing you breaking news. Today tragedy struck …. What are you doing in here?” Glaisey asked when she finally realized that I was watching her. “I need some advise” I admitted to Glaisey’s surprised face. “You need help from me?” She asked wide eyed “Well here is the thing Principle Mousse just told me today that I’ve been named Valedictorian for our class and it something that both Apple and I have been working hard for and I’m afraid that he will be upset that I got it instead of him…” I said trailing off. “Well he’ll have to get over it” Sabayon said from behind me making me realize that I didn’t close the door. “Do I really have to tell him couldn’t I just avoid him until after the speech?” I pondered out loud making Glaisey roll her eyes “You’ll have to tell him though and soon. Besides he had to realize that it was a possibility that you would make it instead of him.” She said pointing out the obvious “I know I guess I’ll call him tonight.” I said reluctantly. 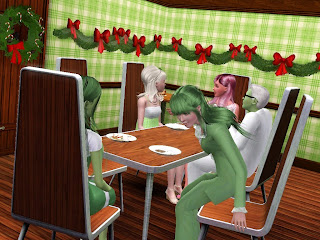 It turned out that Apple wasn’t too disappointed though I could hear it in his voice, but he did congratulate me and offer to help me on the speech if I needed it. It turned out that the ski trip would have to wait until next year since Minte vetoed it as he was going out of town to Pumpkin Spice’s parent’s house. So instead of spending my winter vacation on slopes covered in a winter powdery snow begging to be skied on, I spent my winter vacation in Sunset Valley where the weather was overcast and rainy. Like children lost in a divorce we were sent to spend Christmas evening over at Spearmint’s bachelor pad that he was sharing with some guys on the team. Of course this thrilled Glaisey the thought of spending an evening with possibly cute and muscular football players; however she was sorely disappointed to find that they had all gone home to their families. It was spent surprisingly quite except for Spearmint’s girlfriend Bubbles Lolipop who was well a little too bubbly for Sabayon and my tastes but she and Glaisey got along quite well. None of us mentioned the conflict that was still going on between Minte and Spear but it still hung in the air like a pink elephant in the room that everyone was trying to ignore. 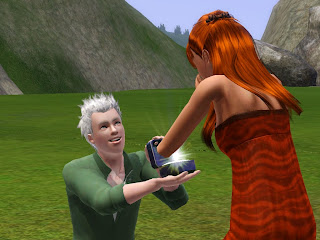 When Minte did return he had some big new that he wanted to tell us. “So I’m guessing you want to know why I called you all out here. Well when I was at Pumpkin’s for the holiday I asked her if she would be my wife.” He paused waiting for our reactions “Oh my berry.” Glaisey shrieked and hugged Minte. “Congrats Minte” I said “Details, you just have to tell us the details.” Glaisey insisted grabbing his arm and leading him to the couch. “Well I got down on one knee and asked Pumpkin if she would marry me.” Minte said simply. Sighing Glaisey said “Fine I’ll just have to ask Pumpkin.” As she went off to find the telephone to pump Pumpkin for details of the proposal. 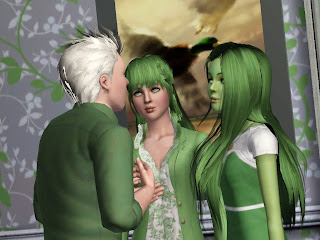 Turning to Sabayon and I, Minte spoke seriously “You’ll be graduating in the Spring so Pumpkin and I are thinking about having a fall wedding. Afterwards I’ll be moving out since I want to live with Pumpkin alone and the three of you will be adults anyway…” He said as he trailed off “So you’re going to be leaving us?” Sabayon asked slowly sounding a little shocked. “Well I can’t live here forever and I want to start a new life with Pumpkin. This past couples of years since mom and dad died have been hard and since the three of you are becoming adults its time for me to move on. I can’t be here taking care of everyone forever, I need my own life. I need to live my life for once and not just watch it pass me by.”

After Minte had made his engagement announcement Pumpkin always seemed to be at our house. Not that any of us minded with her sweet and helpful disposition. I think Glaisey took the most pleasure out of helping Pumpkin plan for the wedding. I could only hope with Glaisey’s love for fashion and persuasion that we wouldn’t be wearing horrible bridesmaid dresses. One thing that was decided was the color scheme for the wedding which was no surprise to anyone being White and Pumpkin. 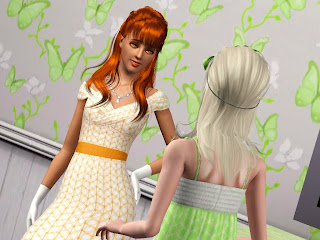 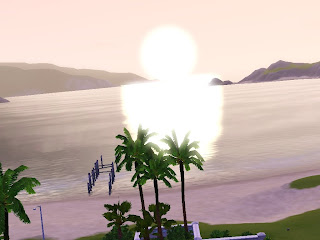 Before I knew it, it was the end of the school year and graduation was only days away. Our gowns were hanging in the closet just waiting to be worn if only for a brief time. My speech was neatly typed out on crisp white paper, each letter a deep shade of black forming the words that would shape my last words that I would impart onto my fellow students. When Graduation finally came it was a warm spring day it almost seemed like summer had started already. The weather outside was already hot and balmy, and tourists were already flocking to the beach from far away lands. 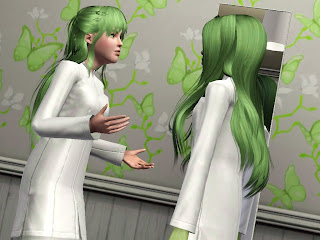 Sabayon stood in front of the mirror that hung in our bedroom adjusting her gown ever few seconds. “Sabayon it looks fine.” I tried to assure her while attempting peak around her to how I looked myself. “I know but it just doesn’t feel right.” She said with a worried look on her face as she kept tugging on the sleeves. “It’s not right, it’s not right, it’s not right.” Sabayon started to repeat frantically repeated over and over “Sabayon everything is fine and will be fine. Tomorrow will be the same as what you do every weekend. You’ll get up, set up your paints and begin painting. It will be fine.” I said soothingly trying to comfort her against her fear of things changing for the unknown that had always held Sabayon tightly in its grip. 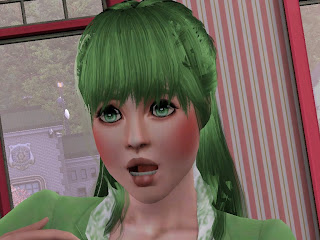 When we finally arrived the football field was filled with chairs and everyone was slowly being herded towards the field to fill them. Minte headed in that direction while Sabayon and Glaisey went towards where the rest of our class waiting to graduate would sit. I on the other hand went to the chair I would be occupying on the stage until my name would be called to give my speech. When I sat down I looked out into the where everyone was seated searching for familiar faces. I couldn’t help but think about that time in my sophomore year when I had to read a section out loud in Science class. I was reading it out loud just fine until I came to one word organism, however instead I had said orgasism. I don’t think my face could have turned a brighter shade of red than it did. I tried to finish read the section though everyone was laughing and then I sat back down in my chair utterly humiliated. 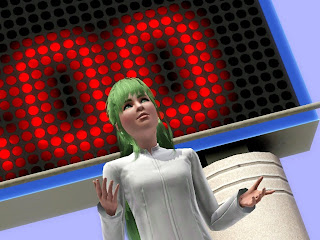 “And now we would like to present our valedictorian Crème Meringue, who will now read her speech and then we will hand out the diplomas.” Principle Mousse said in the microphone interrupting my thoughts. I was surprised to see that everyone was already seated and looking towards the stage with anticipation. Holding my speech in my hand I crossed the stage with everyone’s eyes on me, nervously I cleared my throat and looked back to the crowd still trying to find that familiar face. My gaze finally fell upon Apple who gave me a cheesy smile and thumbs up. I smiled back and began reading my speech “Today is not an ending but a beginning of what our lives will hold. From this day forward we will head out into the world…”
Posted by cupcake at 10:45 AM